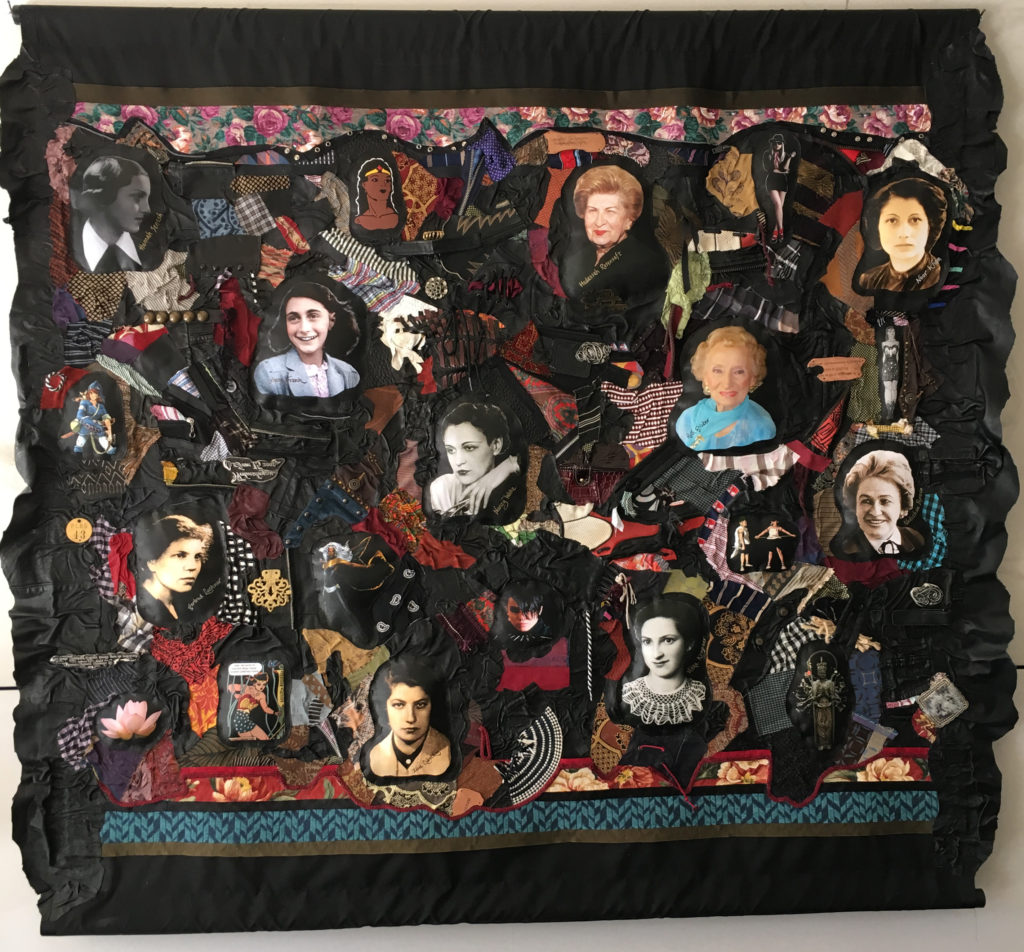 Featuring Abigail Disney, Eva Fogelman, Henry Galarza, Raymond Learsy, Pheonix McFee, Menachem Rosensaft, Elizabeth Sackler, Linda Stein and Gloria Steinem, this 7-minute film is a tour-de-force highlighting female heroes of the time of the Holocaust, and the large sculptural tapestries that were made about them by artist Linda Stein. Coining the 4 B’s: BULLY, BULLIED, BYSTANDER and BRAVE UPSTANDER, Stein asks her viewers, “What does it take to be a brave upstander”? The film highlights the making of these 5 ft sq sculptural tapestries which are exhibited in a traveling exhibition, along with twenty Spoon to Shell box sculptures and one larger-than-life Protector sculpture. For the artist Protector represents fierceness and strength incarnate. With its skin of black leather, blend of zippers, badges, buckles and mixed media, it stands ready to defend. Wonder Woman, also on the alert, is shadowed next to it. The spoon, often a symbol of protection and nourishment, brings to mind in this film the horrific choices that many women faced during these times. Along with the spoon, the shell is another metaphor for protection: a hard protective outer covering needed to survive violence and trauma. The traveling event is called “Holocaust Heroes: Fierce Females” and includes an exhibition, lecture, and performance facilitated by a team of the non-profit Have Art: Will Travel! Inc (HAWT). It has started in Miami and will travel initially to Boca Raton, Santa Barbara and Manhattan. When completed, this video will be looped and shown as part of every traveling exhibition. We now have booked solo exhibitions and educational programs for Miami (we are there now), Boca Raton, Santa Barbara and the Flomenhaft Gallery in Chelsea, and we haven’t yet sent out the official announcement for it.

TAPESTRIES AND SCULPTURE BY LINDA STEIN

A traveling event consisting of:

Seven-minute video on a loop

This exhibition and accompanying educational program is available to museums, universities and educational institutions and includes:

• A full-color exhibition book, with a foreword by Gloria Steinem, and notable essayists/scholars, and published by Old City Publishing. Replete with extraordinary full-color images, Holocaust Heroes: Fierce Females, Tapestries and Sculpture by Linda Stein, includes a foreword by Gloria Steinem, and essays by notable scholars and intimates, as well as the artist. A page-turner, this book tells the story of Stein’s traveling exhibition and educational initiatives, celebrating ten female heroes during the time of the Holocaust. It inspires readers to re-imagine their own roles as Brave Upstanders protecting the well-being of others against bullies and bigots. Obsessed with the theme of protection since 9/11, artist-activist Linda Stein has been drawn to researching the Holocaust, finding that while many people have been recognized for their courage during these horrific times, less attention has been placed on the women who made a difference. With her art, she starts conversations of power and vulnerability through a lens of gender, and provokes questions and dialogue about the continuum between the Exemplar and the Perpetrator. 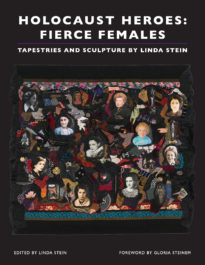 The three-part exhibition includes: Heroic Tapestries, Spoon to Shell sculptures, and a Protector sculpture. Heroic Tapestries represent different aspects of bravery during the time of the Holocaust: Jew and non-Jew, child and adult, World War II military fighter and ghetto/concentration camp smuggler, record keeper and saboteur. Together they represent the many types of female heroism, with war battle gear and without, during the years of the Holocaust. For her Spoon to Shell sculpture, the artist blended spoon and shell into an amalgam of materials, addressing sexual abuse. Protector includes a Wonder Woman shadow and becomes a symbol for the brave defender.

The key message throughout our event and public programs is to explore opportunities people have to resist scapegoating and discrimination, to develop courage to stand up for victims being bullied and to see how bullying is on a continuum from the ordinary to the genocidal.

The Holocaust Heroes project demonstrates that while most people are bystanders under conditions of terror, there are always a few who defy a malevolent authority and do what they feel is the right thing. If heroes existed during the Holocaust, then certainly we can increase the propensity for individuals to become more empathetic and compassionate under normal conditions.

This project is guided by an advisory group of art experts, Holocaust scholars, and individuals who are the offspring of Holocaust-impacted families, including political scientist Jerome Chanes, psychologist Eva Fogelman, healthcare expert Susanna Ginsburg, art educator Karen Keifer-Boyd, art historian and curator Gail Levin, museum director Jeanie Rosensaft, and Holocaust and human rights law professor Menachem Rosensaft. The editor of our exhibition catalog is Amy Stone and the producer of our short video and future documentary is Sarah Connors.

Anne Frank (1929-1945) A diarist and writer, she was one of the most discussed Jewish victims of the Holocaust. Her wartime diary The Diary of a Young Girl has been the basis for several plays and films. She represents the many brave girls during this period and exemplifies the loss and legacy of the 1.5 million Jewish children murdered during the Shoah. Born: Germany. During Holocaust: Amsterdam.

Vitka Kempner (1920-2012) Vitka Kempner was a leader of the United Partisan Organization’s armed resistance in the Vilna ghetto. She fought alongside founder Abba Kovner, whom she later married. Fearless in combat, she was the first woman to play a role in blowing up a Nazi train. Born: Poland. During Holocaust: Poland.

Zivia Lubetkin (1914-1976)
One of the leaders of the Jewish underground in Nazi-occupied Warsaw, she was the only woman in the high command of the resistance group Żydowska Organizacja Bojowa (ŻOB) and testified as a witness at the Eichmann Trial in Jerusalem in 1961. Born: Poland. During Holocaust: Poland.

Gertrud Luckner (1900-1995) Luckner led Freiburg Catholics, with money received from the archbishop, smuggling out Jews over the Swiss border and delivering messages from the beleaguered Jewish community. After the war, Luckner devoted herself to furthering understanding between Jews and Christians. Born: England. During Holocaust: Germany.

Hadassah Bimko Rosensaft (1912-1997) Because of her medical training, she was assigned to work in what was called the Jewish infirmary at Auschwitz, where she saved hundreds of Jewish women from the gas chambers. After liberation, she headed the Medical Department of the Bergen-Belsen Displaced Persons Camp, where she helped rehabilitate thousands of Jewish survivors. Born: Poland. During Holocaust: Poland, Germany.

Hannah Senesh (1921-1944) As one of 37 Jews from Mandatory Palestine parachuted by the British Army into Yugoslavia during the Second World War, she assisted in the rescue of Hungarian Jews about to be deported to the German death camp at Auschwitz. She was apprehended and killed by the Nazis. Born: Hungary. During Holocaust: Palestine, Egypt, Yugoslavia, Hungary.

Nancy Wake (1912-2011) Serving as a British agent she became a leading figure in the maquis groups of the French Resistance and was one of the Allies’ most decorated service women of the war. After the fall of France in 1940, she became a courier for the French Resistance and later joined an escape network. Born: New Zealand, lived in Austrialia. During Holocaust: France.